A High Protein Breakfast Can Help With Fat Loss 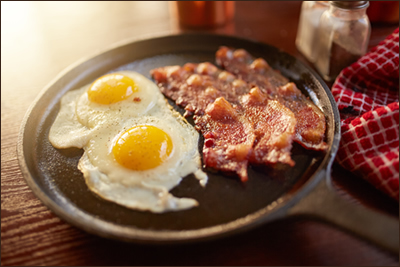 Here’s a great reason to eat a high protein breakfast: you may eat fewer calories for the rest of the day and lose body fat, too.

While most people do manage to eat something in the morning, there are still many people who routinely skip breakfast. Not surprisingly, the numbers are highest among teens and young adults. Many of them say they simply don’t have time to eat breakfast in the morning. But even for those who do eat breakfast, it’s hardly protein-packed. The most common breakfasts are cereal, toast or just coffee.

Even though breakfast is often called “the most important meal of the day” - and a healthy habit that has been linked to a reduced risk of weight gain - much of the benefit may depend on what that meal actually consists of.

The Benefits of a High Protein Breakfast

In a recent study conducted at a major University, researchers recruited 28 overweight students who routinely skipped breakfast at least five days a week. The aim of the study was to compare the effects of two different types of breakfasts on hunger, food intake and body weight over a period of twelve weeks. The two breakfasts consisted of a “standard” protein meal with 13 grams of protein vs. a high protein breakfast with 35 grams of protein.

Those in the high protein group had more stable blood sugar levels throughout the day, and the students reported that the breakfast helped them to feel more full during the day as well. In fact, those who ate the high protein breakfast every morning ended up eating less food over the course of the day. This was about 400 calories less than their usual intake, which led to a loss of body fat.

Those who ate the lower protein breakfast, or skipped the meal altogether, gained body fat over the 12 weeks. This is worth noting, since many breakfast-skippers defend their habit in the belief it will save them calories and lead to weight loss.

The key to eating 35 grams of protein within a 350-calorie limit is to choose high-quality proteins. These include eggs and egg whites, nonfat and low-fat dairy products (milk, cottage cheese, Greek yogurt) and lean meats, as well as protein powders that can be added to shakes or stirred into scrambled eggs for a protein boost.