How To Avoid "Middle Age Spread" 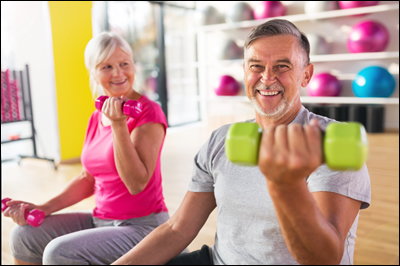 Middle age spread is real. Adults gain an average of about 1 kg every two years as they age. But there are changes that can be made along the way to help stop this ‘creeping obesity.’

If you were to ask a group of 40-somethings if they have more trouble managing their weight now than they did when they were in their 20s, you’d likely hear a chorus of ‘Yes’ in response. They know all too well the meaning of middle age spread. It’s a slow, steady march towards a thicker waistline that seems to go hand-in-hand with getting older. Many people believe this creeping obesity to be inevitable - something that “just happens to everybody” and is therefore completely out of their control. But is it?

Why it’s harder to manage weight as you get older

There’s no question that weight management becomes a bit more of a struggle as we get older, and there are several factors that come into play. For one thing, activity levels change. People tend to exercise a bit less - and a bit less vigorously - as they age, so their calorie burn drops and the middle age spread begins. Both men and women experience hormonal shifts that can affect how much muscle mass they carry, which can also throw their calorie burn into a minor tailspin. Lifestyles change, too. When kids grow up and go off on their own, empty-nesters may cook fewer well-balanced meals, since ‘It’s just the two of us,’ or eat more meals out - both of which can lead to extra calories.

How is middle age spread linked to diet?

As per a major university study, the types of foods consumed make a significant difference. Regular consumption of fries alone has been linked to a weight gain of nearly 2 kgs over four years. Regular potato chip eaters could count on that habit alone to pile on another 3/4 kg - and soft drink added an extra 2 kgs over four years. Not surprisingly, those who ate more fruits, vegetables and whole grains had the least amount of weight gain over 20 years, as did those who exercised regularly, had good sleep habits, and curbed their time in front of the television.

So, how can you keep from gaining weight steadily in the middle years?

Simple. If you’re not exercising regularly, start now. Cardio is great for your health, but you need to do strength training, too. Unless you challenge your muscles, you stand to lose about 2.5 kgs of muscle mass per decade as you age, and that’s calorie-burning tissue you can’t afford to lose. Exercise will also keep your stress level in check and help you sleep better, both of which can help with weight control. As far as your diet is concerned, your calorie burn in middle age isn’t quite what it once was. So, work on controlling portions and packing as much nutrition into those calories as you can - in the form of lean proteins, vegetables, fruits and moderate amounts of whole grains.