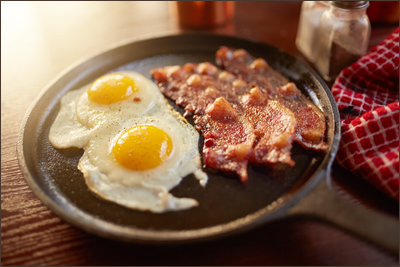 For many decades, people have believed that eating saturated fat can increase the risk of heart disease. In fact, this idea has been the cornerstone of mainstream nutrition recommendations.

However, studies published in the past few decades prove that saturated fat is completely harmless.

A massive study published in 2010 looked at data from a total of 21 studies that included 347,747 individuals. They found absolutely no association between saturated fat consumption and the risk of heart disease.

Multiple other studies confirm these findings... saturated fat really has nothing to do with heart disease. The "war" on fat was based on an unproven theory that somehow became common knowledge.

The truth is that saturated fat raises HDL (the "good") cholesterol. It also changes the LDL cholesterol from small, dense LDL (very, very bad) to Large LDL, which is benign.

There is literally no reason to fear butter, meat or coconut oil... these foods are perfectly healthy!

For the last 50 years the food industry have been removing fat (which is harmless) and adding sugar! There's the key to the obesity epidemic.

Additionally, the explosion in popularity of the Keto Diet (high fat, low carb) shows that there is a growing awareness in the general population regarding the truth about fat.

The consumption of fat, in itself, does not contribute to weight gain. In fact, human experiments have shown that those who eat high-fat diets have a much faster metabolism. Low-fat, high-carb diets spike insulin, subsequently slowing the metabolism and storing belly fat.