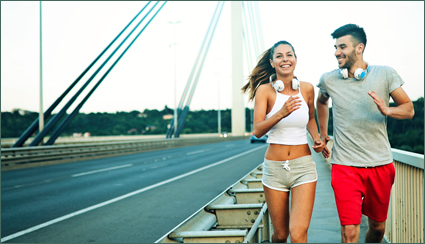 A recent survey of 1000 men and women was conducted to find out what motivates them to shed excess flab. The gender gap was clearly evident. For women, it was all about appearance. Nearly 40% said that when they “don’t like the way I look,” it’s time to get serious. But for men, “not feeling healthy” ranked much higher in driving them to take action.

Women get dissatisfied with their weight much earlier in the game than men do, too. Almost 18% of women in the survey said that it took a gain of only 2 kilograms or less to motivate them to lose, but more than 20% of men said they’d need to gain at least 9 kilos before giving it some thought. Maybe it’s because we don’t frown on excess weight in men as much as we do on women. Guys, after all, look to big, broad football players as role models, while women aspire to look like wispy actresses and models.

Men take a more simple, direct and goal-oriented approach to weight loss than women do, too. It’s something to cross off the ‘to do’ list. Men tend to focus on a single aspect. A higher percentage of men in the survey used harder workouts as their primary weight loss strategy, while women take a more multi-pronged approach of diet and exercise. Men are more direct in their dietary tactics, too. “Just tell me what to eat, and I’ll do it” is something I hear much more often from men, while women are more likely to negotiate more flexibility - as in, “Can I work in a little bit of chocolate every day?”

It’s usually a bad idea for couples to turn their efforts into a contest - primarily because the playing field is rarely level. To begin with, most men’s calorie needs are higher than a woman’s, so men tend to lose more easily than women do. Most men can cut quite a few calories out of their typical diet and yet have a reasonable amount of food to eat, and they’ll still lose at a pretty good clip. This can be really frustrating to the female half: even though she’s eating so much less, she is still losing so much more slowly.

It’s best when couples not only support one another, but also to try to think a bit more like the other as well. For guys, this means not letting weight get too out of hand before deciding it’s time to do something about it - since even small amounts of excess padding increases health risks. While harder workouts will help shed pounds, the multifaceted diet-and-exercise approach favored by women is more likely to lead to long-lasting weight maintenance.

Women could take a tip from the guys by focusing more on their goals, which could help them avoid frustration when results don’t come as quickly as they’d like. And maybe staying on track would be easier for women if the emphasis is shifted to how much better they feel as a result of better dietary choices and increased exercise. With more emphasis on feeling stronger and healthier, women might learn to be more accepting of their bodies, too.

Based on an article by Susan Bowerman - Herbalife Director, Worldwide Nutrition, Education & Training.