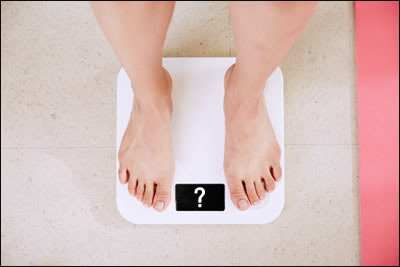 Losing weight can sometimes seem very hard. Sometimes you feel like you're doing everything right, yet still not getting results. You may actually be hindering your progress by following misguided or outdated advice. Here are some common mistakes people make when trying to lose weight.

Only Focusing on the Scale Weight

It's very common to feel like you're not losing weight fast enough, despite faithfully sticking to your diet. However, the number on the scale is only one measure of weight change. Weight is influenced by several things, including fluid fluctuations and how much food remains in your system. In fact, weight can fluctuate by up to 1.8 kg over the course of a day, depending on how much food and liquid you've consumed.

Also, increased estrogen levels and other hormonal changes in women can lead to greater water retention, which is reflected in scale weight.

If the number on the scale isn't moving, you may very well be losing fat mass but holding on to water. Fortunately, you can do several things to lose water weight. Additionally, if you've been working out, you may be gaining muscle and losing fat.

When this happens, your clothes may start to feel looser - especially around the waist - despite a stable scale weight.

Measuring your waist with a tape measure and taking monthly pictures of yourself can reveal you're actually losing fat, even if the scale number doesn't change much.

During weight loss, you inevitably lose some muscle mass as well as fat, although the amount depends on several factors (8Trusted Source).

If you don't exercise at all while dieting, you're likely to lose more muscle mass and experience a decrease in metabolic rate.

By contrast, exercising helps minimize the amount of lean mass you lose, boost fat loss and prevent your metabolism from slowing down. The more lean mass you have, the easier it is to lose weight and maintain the weight loss. However, over-exercising can also cause problems.

Studies show excessive exercise is unsustainable in the long term for most people and may lead to stress. In addition, it may impair the production of adrenal hormones that regulate stress response. Trying to force your body to burn more calories by exercising too much is neither effective nor healthy.

However, lifting weights and doing cardio several times per week is a sustainable strategy for maintaining metabolic rate during weight loss.

Processed low-fat or "diet" foods are often considered good choices for losing weight, but they may actually have the opposite effect.

Many of these products are loaded with sugar to improve their taste. For instance, one cup (245 grams) of low-fat, fruit-flavored yogurt can contain a whopping 47 grams of sugar (nearly 12 teaspoons). Rather than keeping you full, low-fat products are likely to make you hungrier, so you end up eating even more.

Instead of low-fat or "diet" foods, choose a combination of nutritious, minimally processed foods.

Getting enough protein is extremely important if you're trying to lose weight. In fact, protein has been shown to help with weight loss in several ways.

To optimize weight loss, make sure each of your meals contains a high-protein food.

A low-fibre diet may be slowing down your weight loss efforts. Studies show a type of soluble fibre known as viscous fibre helps reduce appetite by forming a gel that holds water. This gel moves slowly through your digestive tract, making you feel full.

Research suggests all types of fibre benefit weight loss. However, a review of several studies found viscous fibre reduced appetite and calorie intake much more than other types. When total fibre intake is high, some of the calories from foods in mixed meals aren't absorbed. Researchers estimate that doubling daily fibre intake could result in up to 130 fewer calories being absorbed.

Eating Too Often, Even If You're Not Hungry

For many years, the conventional advice has been to eat every few hours in order to prevent hunger and a drop in metabolism. Unfortunately, this can lead to too many calories being consumed over the course of the day. You may also never truly feel full.

In one study, blood sugar levels and hunger decreased while metabolic rate and feelings of fullness increased in men who consumed 3 meals versus 14 meals within a 36-hour time frame.

Eating when you're hungry and only when you're hungry seems to be key to successful weight loss. However, letting yourself get too hungry is also a bad idea. It is better to eat a snack than become ravenously hungry, which can cause you to make poor food decisions.

Having weight loss and other health-related goals can help keep you motivated. However, having unrealistic expectations can actually work against you.

Researchers analyzed data from several weight loss center programs. They reported that the overweight and obese women who expected to lose the most weight were the most likely to drop out of a program after 6 to 12 months (39Trusted Source).

Adjust your expectations to a more realistic and modest goal, such as a 10% drop in weight in one year. This can help prevent you from getting discouraged and improve your chances for success.

What's more, liquid calories don't seem to affect the appetite centers in your brain the same way calories from solid foods do. Studies show that you end up consuming more calories overall, instead of compensating for the liquid calories by eating less later in the day.