How To "Get Up Again" After Falling Off Your Diet 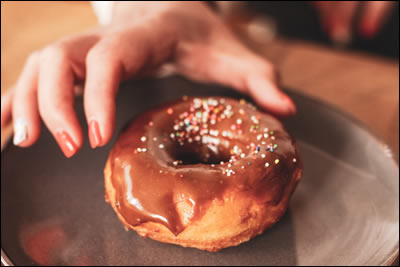 You're having a day that starts out great and the next thing you know something stressful happens at work and you're grabbing a doughnut from the break room.

It only takes a moment for your diet to go from terrific to terrible. No matter how good your intentions, you can't expect to follow your diet perfectly every minute of every day. There will be those times when you have something you shouldn't. So, the trick is to figure out not only what gets you into trouble in the first place, but also how you can talk yourself back down.

If you've fallen off your diet - and everyone does - here are some tips to help you get back on track.

Everyone makes diet mistakes from time to time. What you don't want to do is beat yourself up about it, because you'll feel as if you've failed - which could lead you to just give up and lose control completely. A single event - eating something you shouldn't, or exceeding your calorie limit for the day - is simply a lapse. It happens. Recognise it for what it is, but don't let things get out of control. String enough lapses together, and you've got a relapse - and you're back where you started.

Know what triggers you to eat something you shouldn't.

Most people can identify what triggers them to eat when they shouldn't. Stress, for example, is a big one. When people eat in response to stress, it's because they think a treat will make them feel better. And it might - at least momentarily. But then the guilt sets it, which stresses you out, which causes you to eat more - and the cycle continues. Fatigue, loneliness, frustration, boredom - there's a whole host of emotions that can trigger you to eat. Sometimes there are people in your life that are the problem - like the ones who are always urging you to have something "just this once."

Figure out how you can change your response next time.

If emotional eating is a problem for you, work on finding other ways to deal with your emotions that don't involve food. It's been said that people eat to 'stuff down their emotions' in order to avoid feeling sad, lonely or frustrated. But many people also say that it's really the fear of experiencing the emotion that makes them eat. When they simply let the emotion happen - and learn how to deal with it - it's never as bad as they thought it would be. When your emotions are getting the best of you and food is calling to you, try writing your thoughts down, calling a friend or turning on some soothing music instead.

Talk nicely to yourself.

If you've eaten something you shouldn't and the little voice in your head is saying, "You're such a failure, you'll never lose weight!" you need to be a little nicer to yourself. Instead, say the same thing to yourself that you'd say to a friend if you were offering support. "So, you got stressed and grabbed a donut - it's not the end of the world. Let's take a walk at lunch to burn off some extra calories and stop for a salad on the way back."

Delay tactics can work really well when you're feeling tempted to eat something you shouldn't. If you're keeping a food diary, take a look at it before you indulge. Considering what you're about to eat, and why, can be enough to stop you in your tracks. It also helps to tell yourself that you'll wait 10 minutes once the urge strikes, to see if you still feel the need to indulge. Most of the time, you'll get busy doing something else and just forget about it.

Get back on track right away.

Don't let the day get away from you. A slip is one thing - just don't let it turn into a fall. If you ate something you shouldn't have, just get over it and pick right back up at the next meal. It's too late to do anything about the last meal you had - focus instead on the one you plan to have next.

Remind yourself of how much you've accomplished.

Sometimes after a slip, it helps to do a little 'system reset.' Think about what motivated you to make changes in the first place, about how far you've come, and the accomplishments you've made. You have the know-how and the commitment - and you know you can achieve your goals because you've been making progress. Remember that progress is measured in many ways - not only by what the scale says. Every time you make the best choice in a restaurant, pack a healthy lunch, turn down an offer of food you don't want - or skip the doughnut when you're stressed and take a deep breath instead - you win.